Welcome to Sycamore and Mulberry classes

Year Four visited South America in the morning where they made Mardi Gras masks. In the afternoon they
visited Ecuador and the Galapagos Islands looking at the wildlife and making an iguana!

What we have been doing

Year 4 have been exploring their Viking Topic through English, art, DT, history and geography. The children have expressed their enjoyment of the topic through their Google Meet sessions. The children made Viking boats in Art. They discovered the Viking settlements on a map for Geography. They cooked and ate some yummy Viking bread as part of DT. They even made Viking pendants called ‘amulets’, which were thought to bring good luck – hopefully they bring us enough luck to be back together in the classroom soon!

Year 4’s autumn term topic is ‘African Adventure’. The children have explored many aspects of the geography and history of the continent and have focused on Ancient Egypt. They enjoyed an Ancient Egypt curriculum day where they built pyramids and created necklaces and death masks. The children are taking part in a virtual trip to the British Museum where they will be exploring artefacts and mummies from Ancient Egypt.

In DT the children have enjoyed creating looms for weaving. In English they have been reading ‘There’s a pharaoh in our bath’ and have been enjoying a second book, ‘Omar’.

Here is some of our home learning.

Our class reporter was Eve. She said: “We have been dividing 100 by one whole or dividing 10 by a whole number. In English we were learning about changing the end of a story like Romeo and Juliet. In art we were drawing the chimneys of a famous artist in Spain called Gaudi. We have been learning about pie charts – how they work and what they do.”

Our class reporters were Stella, Priyana and Akshana. Stella said: “This week we have been learning about different things like the Tudors, the book The Devil and his Boy and length and perimeter. In the Tudor topic we learnt how Henry VII became king and how the Battle of Bosworth ended. In the Devil and his Boy we each read one paragraph and we had turns explaining what had happened. We are reading this book because it is set in Tudor times. In length and perimeter we were doing word problems where we had a shape and we had to add up the perimeter around the shape. I had a really fun week!”

We have also been very busy during our art lessons creating wood blocks inspired by traditional African prints. We looked at the features of African prints and incorporated them in ours. We used string to create a pattern on our block and then we used the paint and rollers to make them very colourful. We pressed them down on our paper to create wonderful images.

Year 4’s autumn term topic is ‘African Adventure’. The children have explored many aspects of the geography and history of the continent and have focused on Ancient Egypt. They enjoyed their trip to the British Museum in November where they extended their knowledge by investigating the Egypt and Africa exhibits.

In English they have been enjoying the Power of Reading text ‘The Village that Vanished’ and a second book, ‘Fly Eagle Fly’. Year 4 have also enjoyed developing their football skills this term in sessions run by Non-Stop Action. 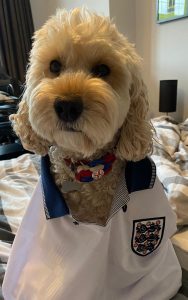